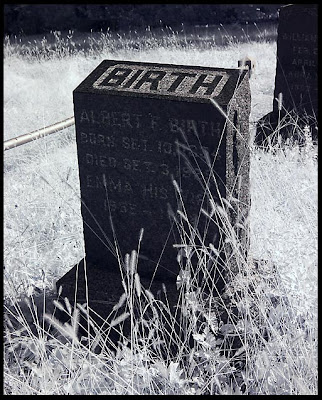 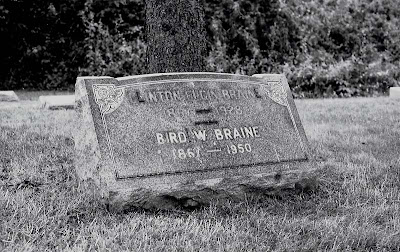 The Merriam-Webster dictionary lists the first known usage of the term 'birdbrain' in 1933; sadly they do not provide the example.  A search through my OED reveals no listing for the word.  Given that he lived for seventeen years after its coining, I hope old Bird was able to take a joke.
Visuals and Verbiage by Neil J Murphy deposited around 1:58 PM

HOW COOL is that?? LoL I sometimes see weird names as well, and strange spellings and mis-spellings on headstones, that one always gets to me...laying under a mis-spelled stone must be horrid!!

Amazing. I can't believe you found these. Well, of course, I CAN. I just find them, especially Dumb and Bird Braine, unbelievable. Weirdly weird.

Being named 'Bird' is odd enough!

My great great grandfather was a Bird Berry.

Real great finds, how is it possible.But as always the reality is stranger than the fantasy. Thanks for showing them.

Ha ha! Those are just excellent. I do often wonder what these people thought of their names when they were alive.

Ha,ha, yes this is humor, I like the coffin, very a obvious and the Bird is also funny, maybe related to Lady Bird?

I grinned all the way through, and laughed uproariously when I go to poor old Bird.

I had no idea that expression was only coined in 1933. So when Bird was christened it was not some evil joke played out by his parents!

I guess there was Lady Bird Johnson, too. She had a real name, though, I think. Just googled ... Claudia Alta.

I have a couple of strange names but not laugh out loud funny like these.

Too funny. I've seen a "Brain" family marker, but nothing like "Bird Braine".

You've had quite the eye for unusual cemetery names. And now you've found the perfect meme to show them off.

What an amazing and unusual collection! Fantastic series.