I was in Trader Joe's for my regular grocery run on January eighth when I happened to notice the plants they had in the space between the doors, where you'd pick up a handbasket or flyer or crate of Clementines on your way in.  I'd forgotten they sold potted plants in addition to the cut flowers; this being right about the dead of winter here in the northeast gardening isn't at the top of my agenda, although I do have a large sunny deck to fill come the summer.
This amaryllis caught my eye.  I'd had an amaryllis before, and I managed to get that one to bloom a second time quite accidentally after finding the dormant bulb, which had been left under a sink for two years.
This was a nice-looking one, too.  Two stalks, both with healthy-looking buds.  For $5.99 I've done worse, so I took it home and set it on a small table in a corner behind a chair where it could get the afternoon sun and the cats would ignore it.
I kept the dirt damp for a week as the buds grew fatter, then moved the table (and wound up rearranging half the furniture) in front of the window, so as to get the sun for most of the day.  This, along with some extra water, proved to be a fortuitous move, since by the 17th the shorter stalk pushed one bell out from its green bud, fell the next day and began opening on the 19th.  This stalk has two trumpets on it; from the progress seen here I should have a good shot of the double flower by Sunday.


Setting up these shots was easier than it may seem.  There's no fancy lighting or backgrounds, all I did was raise the blinds a bit more than normal and annoy the cats a bit more than usual with my furniture-moving.  The light is natures own, filtered through the window screen, and the background is the matte black of the flat-screen TV.


I did use an assortment of lenses for these shots, the 50mm, 17-40 and 24-105, mostly at f8 or f11 for added depth of field.  Shutter speeds were 1/25 to 1/125, all handheld.  The small aperture, the black background, and the high-key lighting combine to isolate the subject.  This isolation accentuates the intensity of the color and draws the eye into the detail of the image.


.
Visuals and Verbiage by Neil J Murphy deposited around 10:32 PM No comments: 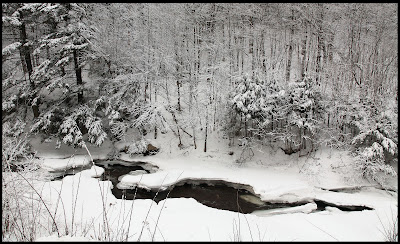 Winter Water, Mendon Creek - February 2009
The 30th annual Monkey Island holiday card was mailed from Long Beach, New York this year on the Monday before Christmas. It was an informal format this year (fold on top) with the sentiment 'Twisting through the winter wood, twisting the year away' on the inside. The picture was taken alongside Route 4 near Wheelerville Road between the towns of Mendon and Killington, Vermont.
I really like the way this picture came out, and many people have said many very nice things about it, for which I'm grateful.  And not only because I had to climb over a pile of plowed snow on the roadside in order to clamber down the  ice-crusted snowy embankment so I could capture the scene  closer to the level of the creek, so there wouldn't be the extreme downward angle I'd get if I just shot from the road, which would result in a reverse keystone effect with the trees.
This was shot with the 5D using the 24-105L at 24mm.  I used ISO 100  to keep the noise to a minimum, and a shutter speed of 1/80th of a second at f11.  The f-stop is the key to the whole picture, a small aperture (and f11 is about as small as you want to go with a wide angle lens, any smaller and there will be distortion at the edges and darkening in the corners) gives greater depth of field, which is how all those trees are in such sharp focus.
.
Visuals and Verbiage by Neil J Murphy deposited around 12:59 AM 2 comments: