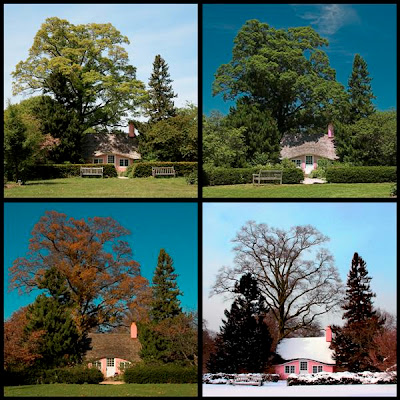 The 29th annual Monkey Island holiday card was mailed out in mid-December from Killington, Vermont bearing the above picture and the sentiment inside reading "Wishing you four seasons of Joy". It was in a booklet form this year, with '2009' printed below the picture. Having '2009' printed there may have confused some people; I prefer to imprint the card with the year of issue.

As for the pictures themselves, they were taken three years apart, with three different cameras and obviously at four very different times of the year. This is the Pink Playhouse, a garden shed now, on the Coe estate at Planting Fields Arboretum on Long Island's north shore. The winter scene was the first one I made, in January of 2005, with the original 6.3 MP Canon Rebel. Winter scenes like this don't last long around here, and I'd already lost the snow on the trees, but it made for a nice composition, one I enlarged and framed, and which became the catalyst for this series.

The upper left-hand picture, Spring, is the most recent vintage; it was taken in May of 2008, an early image made with the 5D. Summer, next to it on the right, was taken back in July of 2005 with the 20D, I had just gotten that camera, so this was an early shot from that one, as well. A pattern emerges... Finally the Fall picture was taken a few months later, in November, also with the 20D.

Special thanks go to Sherry, for poking and prodding me into finally assembling this series for the card this year.

December, 2009
Here's an extra panorama of the Playhouse that I made after last month's snow. It was assembled from 18 separate images, and took over an hour to crunch.
.
Visuals and Verbiage by Neil J Murphy deposited around 11:58 AM 2 comments: