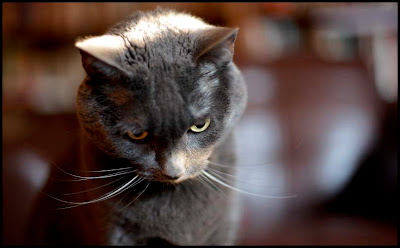 A couple of pictures of Betsy from last month, last year. These were taken the same day as Legs in Slatted Shadows, below. I like the one above because of the way Betsy looks almost contrite, as if she's sorry about something she's done: someone she swatted, worried that she may have caused some pain, or bloodshed, even. Which, actually, she never is. 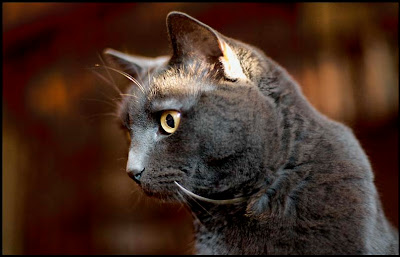 She's usually shooting some variant of this look, a cross between alarm and accusation, with a few daggers and some piss for good measure. I don't know how she got this way. She was so cute!
Visuals and Verbiage by Neil J Murphy deposited around 10:30 PM 5 comments: 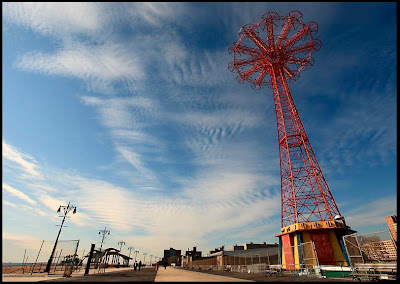 It has been too long, both since I updated myself here and since I last looked in on the deterioration of Coney Island. Monday was a brilliantly clear and crisp day with high, thin clouds rippling across the sky, looking for all the world like the saran wrap stretched over a bowl that had had someone's fingers pressed to it.

I parked near the aquarium, on the side of Surf Avenue without the meters, and walked over to the Cyclone. No matter what becomes of the neighborhood, the Cyclone, Wonder Wheel and Parachute Jump will always be here. Only two of them will ever operate under today's liability standards, still the Jump is nice to just look at. 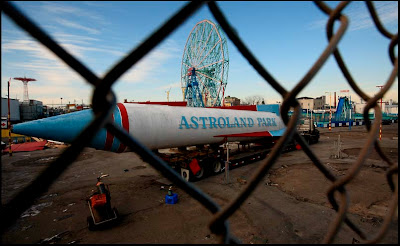 But the Astroland rocket has taken off, or been taken off. Removed, to be precise, this past January 6th (video link). Currently it's reposing on a flatbed trailer behind the food stand it sat atop for the previous forty-six years. Nobody ever thought to landmark Gregory and Paul's boardwalk snack bar, so the rocket is gone and the premises up for lease, along with the rest of the commercial strip along the boardwalk.

Now the boardwalk is bisected with a fence along this stretch while great holes appear in front of the storefronts that may or may not have tenants to cater to whatever throngs in thongs show up next summer to wear away the woodwork. 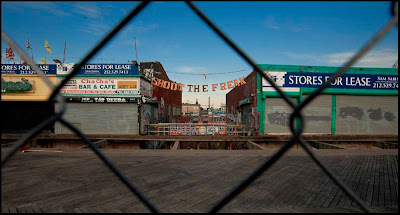 What's to become of the classic seaside shooting galley?

Ruby's bar is closed, along with the arcades and snack bars, and even the seaside Nathan's will be gone soon, too. Grabbing a dog next summer will mean a walk down to the original building on Surf Avenue, which is thankfully not part of the stalled redevelopment. And in a cruel twist to the former shopkeepers, after they were closed down the city decided to replace the shredded planks in the boardwalk, finally remedying the hazardous conditions that visitors and owners alike had complained about for years. 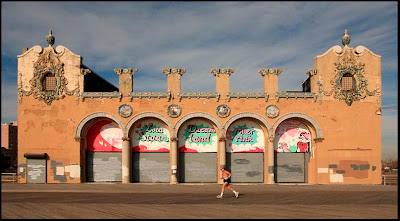 The old Child's restaurant building is still a pleasure to gaze upon, if only they'd quit splattering the base of it with paint. It's a NYC landmark, with absolutely beautiful terracotta ornamentation high enough up that the local vandals can't get to it (easily). Last summer the interior was taken up by Lola Staar's Dreamland Roller Rink, as you can see by the signs in the arches. I should also point out that it was about 28 degrees on the beach that afternoon when the shirtless man in shorts jogged by. A shirtless man in shorts who appeared much older than me. 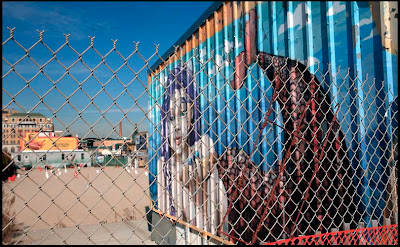 My mermaid still watches from her corrugated perch. But her building is small, for rent, and sitting on a prime boardwalk location.
She's doomed. 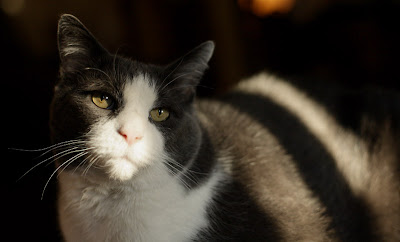 The final Monday of 2008 was one of those few days per year when the light in the living room was of any quality, and there were models at hand. Not exactly willing subjects, mind you, but I put the 50mm lens on the 5D to see what I could get.

The harsh light falling on his white fur caused a hotspot around Legs' snout in the top picture. The focus and metering point was on his left eye for the mid- to three-quarter tones. Had I metered for the highlight then everything from the quarter tones on down would have been mud, and the ears would have blended into the background. By sacrificing a small part of the image, I save the whole composition. 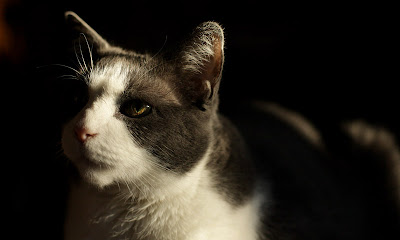 For this one I closed one row of the slatted blinds over the windows to add more shadow to the background, and adjusted another to let in more light. In the first picture I like the way the light was limning the ears; by increasing the contrast this way I hoped to be able to capture more detail in the highlights and a stronger outlining of the ears.