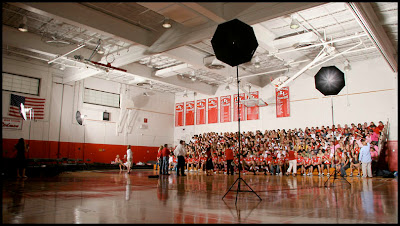 October 4, 2007
It's nice to be able to sit and watch someone else do what I do, especially when they're given plenty of time to set up, and have the lighting to really illuminate a crowd. So it was a couple of years ago when I was assigned to shoot team pictures on the day of the senior group shot, which was being done by an other studio. And being done very nicely, too

I normally used two lights, shooting them through transparent umbrellas, unlike in the picture above, where the lights are shooting into a reflector umbrella. Both methods have their merits, mine being a softer light spread across a wide area, and the four-light reflector method giving a sharper, more concentrated light.

So my 900 watt strobes are on stands that extend to about fifteen feet high. I'll position them about thirty feet from the bleachers, tilted slightly up, with the left one pointing slightly to the left, and the right one to the right. These units put out a lot of light, and if they were simply leveled at the subject they would be a huge hotspot in the center.

This guy's setup was quite different, as you can see. Four 900 watt units, only they're fired into reflectors. Very nice, as the four lights will cut the shadows, and the reflectors give a nice even illumination. Trouble is, you have to travel with and set up four lights every job. When the school's yearbook adviser told me he'd been setting up since 10:30 I wasn't surprised. Four lights are a lot to assemble, aim and meter for.

I got to have a busman's holiday then, sitting on the stands opposite the kids, watching the photographer and teachers seat everybody, trim the sides, and line up a seated row on the floor. When he powered up his strobes, I discovered I could trigger them with my flash, which made for a few interesting shots, like the one above.

Visuals and Verbiage by Neil J Murphy deposited around 9:24 AM No comments: 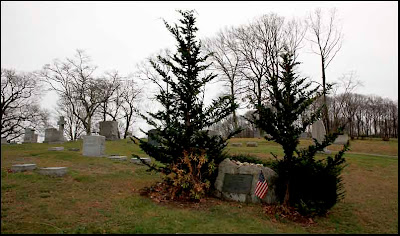 It's a good thing Harry Chapin and Billy Joel never got into the habit of carpooling, or worse, following one another anywhere, or there might be two graves up on this hill. Billy somehow survives to late middle age though, while poor Harry never got past exit 40 on the Long Island Expressway one rainy summer afternoon in 1981 on his way to a concert in Eisenhower Park. I remember hearing the initial traffic reports about the accident on WLIR-FM, before we knew who it involved.

Nassau County eventually named the theater in the park after Harry, though the Interstate Highway Commission opted to keep the designation of 'Exit 40E - Jericho Tnpke' for the highway ramp. 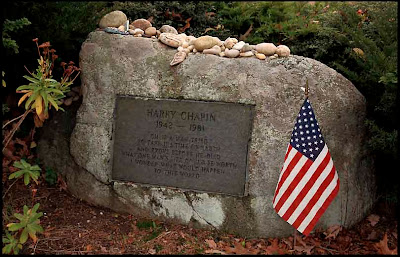 Harry spends his days and nights now just below the top of the highest point in Huntington Rural Cemetery, on the quiet side of the hill, insulated from the from the sound of traffic on Route 110. The hills on this part of the island form the Harbor Hill Moraine; detritus left behind by the retreating glaciers from the last ice age. Appropriately, a glacial boulder serves as his headstone, embraced by box evergreen bushes and flanked by two young pines.

The stone is covered by other stones, dozens of rocks and pebbles, left by visitors, some with painted messages, and keys, and coins. Lots of coins, and I'm sure many of the visitors to this windswept hill pull a few hits off a joint as well, before dropping off some quarters and dimes, beckoning Harry to keep the change. 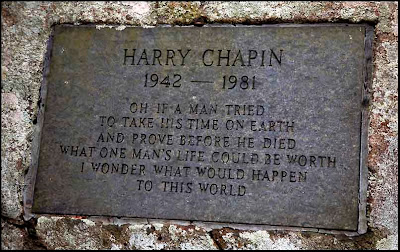 Visuals and Verbiage by Neil J Murphy deposited around 12:15 AM 4 comments: 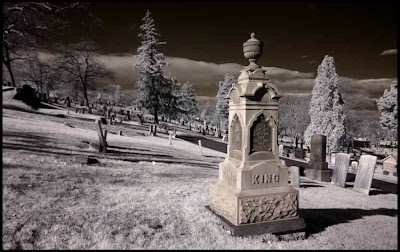 Huntington Rural Cemetery spreads across several hillsides along the west side of Route 110, New York Avenue, in this village on Long Island's North Shore. Names familiar to the town's commercial signs and its very streets dot the landscape, giving the grounds an air of coincidental oddness.

I think this may be the only zinc marker in this place, although I haven't covered all of the grounds. It's over seven feet tall, and was raised to the memory of Hester King, the young wife of J.M. King, who died in 1886 at the age of 33.

To those of you visiting via Taphophile Tragics, a short explanation about zinc markers is in order, as they are, to the best of my knowledge, unique to the United States.

These are hollow, metal grave markers that were manufactured by a company called Monumental Bronze, located in Bridgeport, Connecticut, on the east coast of the U.S.  They were only made for 37 years, between 1875 and 1912, and all of them came from the single foundry.  They were marketed up and down the east coast and midwest United States by sales representatives, in many designs that could be chosen from catalogs. (This was long before the Truth-in-Advertising era; though cast in zinc, they were called 'white bronze' for enhanced sales cachet.  Color-wise, they're actually closer to a light gray, or gunmetal blue.)


There were numerous advantages to using these markers: they were durable (though sometimes prone to metal fatigue in the taller examples), the bas-relief lettering is perfectly legible to this day, and convenient (the monuments had removable panels for the names of the deceased; unused panels had symbolic embossing until the space was needed).  And being made of 99% pure zinc, they wouldn't rust, and naturally repelled organic growths, so no vines or moss would ever cling to their surface.

More information about these unusual markers can be found here.

Seven and a Half Weeks 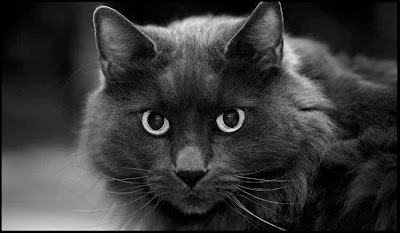 I only now realized that it has been just shy of two months since we've featured the cats on the blog. Conveniently I was stalking two of the little darlings just the other night. Clark was skulking around the living room and giving me the stink eye, so I followed him around for a while with the 70-200 lens opened to 2.8 with the flash pointed at the ceiling. 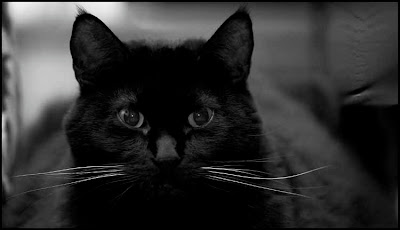 I captured Molly with the same set-up, except she was draped over a dining room chair under the table, so the light washed through the half-inch thick glass, giving an ever-so-slight diffusion. Because of the mixed light from the bounced flash, I decided to convert these both to black and white, which I did during the RAW processing.

Visuals and Verbiage by Neil J Murphy deposited around 3:26 AM 1 comment:

For the first days of December, when I should at least be wearing an unbuttoned winter coat, if not battling driving snow, I bring you a vista from the last weekend of November: Warm breezes, bright sun, and a clear view towards Democrat Point at the very western end of Fire Island, seen from the top of the lighthouse, which, for all my visits here over the years, I've never ventured to before.

Looking east towards Kismet and Saltaire
The spiral staircase with its 180 or so steps (I admit, I lost count at 120, just above the halfway point) was a test, but worth it for the vista. We were able to walk on the outside platform just below the rotating light. Above is the scene east, with the National Seashore in the foreground and Burma Road to the right.