(click to enlarge)
Another panorama, if you can stand it, here from our trip to Ottawa this past June. This scene of the Ottawa River was taken from Parliament Hill, not far from the Cat Condominiums, which were featured here almost a year ago. There's an overlook here, complete with a cannon, which makes sense, since this is an ideal defensive point.

In the distance on the left is the Canadian Supreme Court building, beyond which is the Portage Bridge, one of the three crossings to Gatineau, Quebec, that we see in this picture. The center of the picture is the Hull section of Gatineau, with the cantilever Alexandra Bridge on the right and the MacDonald-Cartier bridge just visible behind it.

This pano was stitched from eight separate images shot horizontally. Click on the word 'overlook' in the first paragraph to see on Google Maps where I stood. 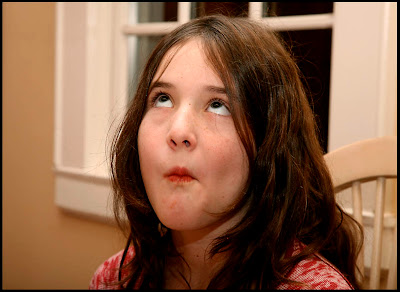 She's only ten ("Ten and a half!") but as you can see she's just about perfected the teenaged eye-roll on command.

Visuals and Verbiage by Neil J Murphy deposited around 10:41 AM 1 comment:

(Click to Enlarge)
On my first attempt to create this panorama I got almost what I was after. It was late in the afternoon when I made the original pictures, and I didn't want to get too carried away, so I stood close to the auditorium and only made six exposures. But those six stitched together pretty well, and I wanted to try a wider view.

For this shot I was there earlier in the morning, around nine AM. I stood much further back than for the first picture, and I spent some time altering my exact position so that I'd have three distinct vanishing points going straight up to the horizon, as well as keeping the large building off in the distance on the left within the break in the trees. My own shadow was unavoidable, I'm afraid, but it does add its own charm to the final picture.

I was standing for these shots, shooting vertical and keeping the lens parallel to the ground. For the pano in the link I was lying on the ground, shooting upwards. I had to do that in order to keep the entire tree in the picture, given how much closer I was, and as a result there's very little in the way of foreground. For this new one I moved back about thirty feet so as to be able to include the sidewalks (actually a single sidewalk that comes up from the street on the left and curves down along the roadway on the right) and steps leading to the hall. This gives just about a 180 degree view.

Ultimately I'm going to have to come back here with a stepladder, and stand it even further back, so I can capture the entire sidewalk sweeping in an arc in the foreground. I'll need the ladder due to the undulating topography, since the roadway is a few feet below the sidewalks. I'll also come a little later in the morning, when the shadows aren't so long.

(Click to Enlarge)
Here are the eleven individual images that make up this panorama. The final size of the stitched version is 32" x 10", though the magic of rasterization could easily double that. 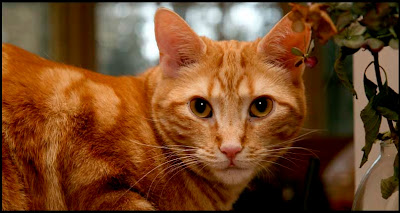 Meet Milo, the monogrammed cat. (I think all tabbies with these markings should have a name that begins with 'M'.) Now, before anyone, especially my mother-in-law, gets any ideas, Milo is not the latest addition to our household; he lives a very fine life in southern Connecticut along with Alix, Lucy, Nemo and Nicki. Together they keep a couple of humans, our friends Laurie and Ed, as pets.
While Sherry would have you believe that any cat within a fifty-foot radius of me is 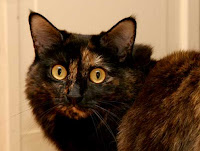 hopelessly drawn in for a head scratch, the truth is that only about one in five actually behave this way. So today the demographics proved my theory, and Milo was the 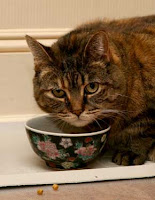 only one interested in working with me. Alix and Lucy didn't like me pointing the camera at them, or perhaps the high-pitched whine from the flash unit was bothersome. Either way, as you see, all I have of them is a single frame of each: Alix, above left looking alarmed, and Lucy on the right, glaring at me. Of course, I was interrupting her meal. Nemo and Nicki kept completely out of sight, though Laurie showed us a video of Nicki drinking from a glass. 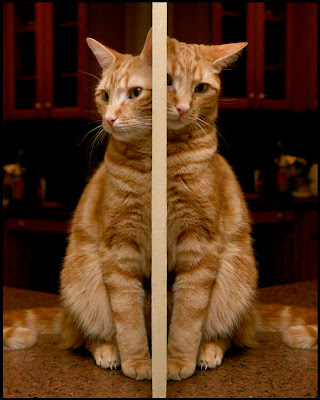 Milo didn't mind the camera, or the whine, so I was able to get several nice shots of him. He teased me with the pose that I created the above composite from. He was sitting on the counter of the pass-through between the kitchen and dining room, rubbing his face on doorway moulding. I wanted just half his face behind the wall, but there was too much activity in the room to keep his attention. I was only able to get the two shots before he jumped down, and looking at them later, I came up with what you see. I kept the bit of woodwork in the final image because the thought of a two-eared, three-eyed, bi-nasal, double-mouthed, two-tailed, four-legged cat was too weird, even for me.

That and the front legs wouldn't have lined up.

I wandered through a section of the Kings Park property that I had never been to before, a ghost town of about a dozen houses and half a dozen more buildings that apparently made up most of the staff housing for the hospital.

A deserted suburban street, overgrown trees and shrubs obscure the barricade that keeps traffic out from the intersection with St. Johnland Road. The houses on either side of what Google Maps calls West 4th Street are wood-framed and completely overtaken by vegetation.

Above is one of the several houses made of wood, brick and fieldstone, built a bit stronger, on a larger bit of land, perhaps for an administrator or department head. Still a wreck, though.

The above infrared is a panorama made from six vertical frames, stitched with Photomerge® in Photoshop Elelments 6.

Below, a few of the other buildings. 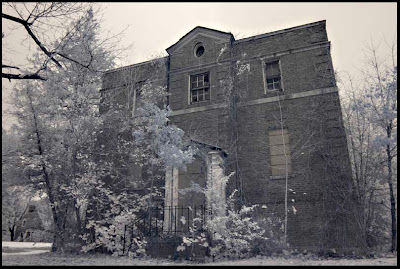 The two houses below are part of an open courtyard of four residences, the other two being to the left of these structures, and behind me where I stood shooting this. 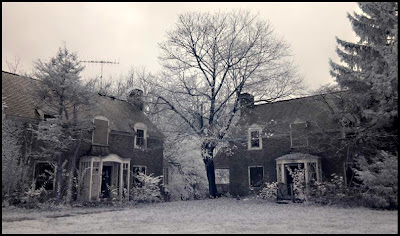 Visuals and Verbiage by Neil J Murphy deposited around 5:26 PM No comments:

Kings Park is a mostly abandoned psychiatric hospital complex on the north shore of Long Island. It's not entirely abandoned, though: there are a few operating buildings and residences, and part of the site is the Nissequogue River State Park, but for the most part the acreage is a silent collection of assorted structures quietly going to seed.

The building above is York Hall, an auditorium at the entrance to the state park section. This infrared image is a panorama composed of six images. I shot this a little differently than my other panos in that all of the images were made vertically. Shooting vertically means there's less distortion on the sides, and the stitching is easier to perform. It also means you need to take at least twice the number of pictures in order to create the view you want, but given the quality of the results, the time and and space is worth it. It also affords you a taller image since you're using the long end of the aspect ratio for your height, so this makes for a bigger picture overall, which in turn means better detail. The printed sized of this picture is 11" x 22 3/4".

What I love about this image is the way Building 93 stands as a dark sentinel off in the distance at the far left, in contrast to the bright sunshine on the auditorium facade.

Visuals and Verbiage by Neil J Murphy deposited around 8:29 AM No comments: 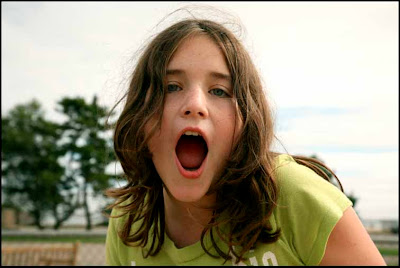 Since I featured her brothers in yesterday's post, I suppose it's only fair I put a picture of Rebecca up here today. This was taken at Amitystock in September, when she and her friends Rachael and Sarah were wearing me out on the merry-go-round.

Rebecca has website too, you know. You can visit it here.
Visuals and Verbiage by Neil J Murphy deposited around 7:36 PM No comments: 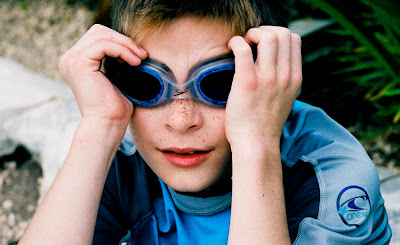 Brian - December, 2004
Too many weeks between updates, I know. Unfortunately, I must focus my talents towards those who pay for them these days, and while it may not be much, it's more than this website brings in. But even I'm tired of seeing last month's infrared pictures of something that happened a few weeks earlier.

No, instead, let's travel back almost four years and a few thousand miles to the Yucatan Peninsula in Mexico, where we find variations on a theme: Brothers in Masks.

Top, we have Brian adjusting his Speedo goggles, while below it almost looks like someone was suited up by someone in a hurry. 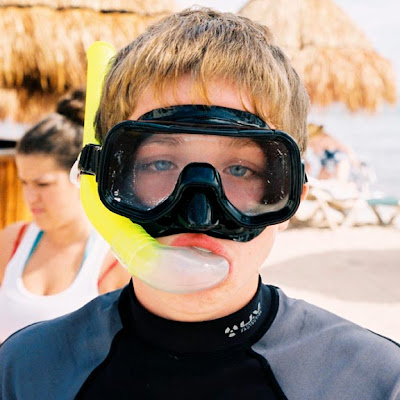 Devon - December, 2004
Or maybe the mouthpiece is supposed to fit like that...and that's Allie in the background, by the way.

Tech notes: Shot on film, of all things, with the Canon EOS 3, scanned by the lab to jpegs. Not the greatest quality, but workable.
Visuals and Verbiage by Neil J Murphy deposited around 9:45 PM No comments:

Email ThisBlogThis!Share to TwitterShare to FacebookShare to Pinterest
Recurring Nightmares: one of us
Newer Posts Older Posts Home
Subscribe to: Posts (Atom)