Christmas Day dawned with high, thin clouds.  It wasn't too cold, high thirties, so, with family obligations obliged the night before, I pointed the car east for a day on the road.
Christmas, New Year's and Thanksgiving Day seem to be the best time for a drive on Long Island; all the idiots are home.  Except for the one in the Hummer, who came up from behind me in the HOV lane on the Long Island Expressway (I'd had the lane to myself when I got on) and hung twenty feet behind me as we went 75 MPH toward Riverhead.  He wisely left at the first exit lane, which is good.  If he hadn't, I was going to simply take my foot off the gas until I hit 55 and he gave me some space. 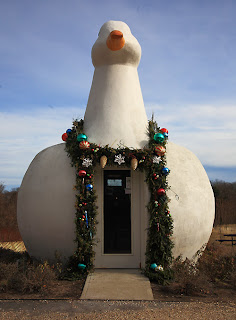 The ride was uneventful after that, and I made it to my first destination, The Big Duck, by around eleven in the morning.  The sun was shining off and on through the clouds, but the overall scene was pretty flat.  I hadn't seen the duck done up for the holidays at this, its original location, before.  When it sat at the entrance to Sears-Bellows park I made a nice shot that later became a holiday card.
Since I can't do a road trip without including a cemetery or two, I made sure to have a good one along the way.  Green River Cemetery in Springs is the final stop for a dozen or so prominent names from the twentith century.  I had only one in mind, a painter who lies under a giant rock, who overturned his convertible one drunken night less than half a mile away, killing himself and another passenger. 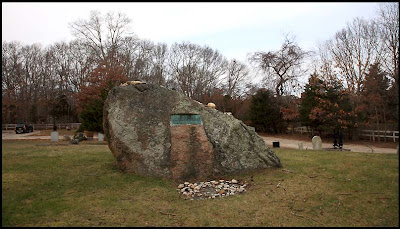 To judge from the dates on the surrounding stones, Jackson Pollack had this hillock all to himself until the early nineties. 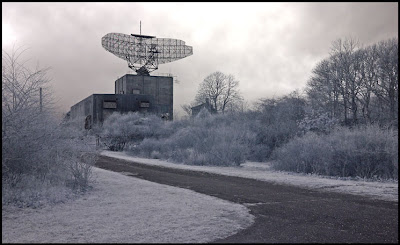 The main point of this trip was to spend some time wandering around Camp Hero State Park, a former Army, then later Air Force base located about a thousand yards west of the lighthouse.

If you've ever driven along Montauk Highway as it rolls through the scrub pine east of Amagansett you've seen the radar tower pictured above off in the distance.  The most prominent feature of the site, the  SAGE (Semi Automatic Ground Environment) AN/FPS-35 antenna was probably the last major structure there, built in 1958 to detect long-range bombers during the Cold War.

The road in the picture leads to the locked gate of a fence surrounding the tower and some other buildings.  This part of the park is closed; the military deactivated the radar in 1980, and all operations here ceased by 1984.

This sign was curious; usually when I encounter these signs they don't give such specific indications of the danger involved. I followed the fence from here until I reached the expected gaping hole about a hundred feet along.  (There's always a break in the fencing around these places.)

Winter is a good time to explore abandoned sites like this, when the undergrowth has dried up and thinned out, all the better to watch for the inevitable sinkholes and open manholes.  The one here, on the right, looked to be a service box for an underground electrical and communications network, judging from the conduits I could see.  I couldn't see very much, though, since it was filled with water of an indeterminate depth.  Nestled as it was, surrounded by what would be in the summer tall, thick grass, I began to suspect the 'falling objects' that the sign warned visitors of would be the visitors themselves. 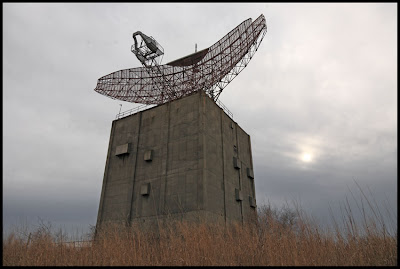 I can't find any stats online about the height of the concrete tower, and I wish there were something in the shot above to indicate scale, so all I can do is tell you that this thing is immense.  The dish itself, according to what I found, is 126 feet wide and 38 feet high.  Using that as a guide, I'm figuring the base is at least twelve to fourteen stories tall.  Other than what seem to be vents, there aren't any windows, and only one door, opened, on the north side.  (No, I didn't go in.  I'm curious, but I'm not stupid.)

Wandering about under this thing was a little humbling in a way: the mass of the concrete, its sheer height, the 40 ton dish atop it all, which, by the way, moves freely in the wind, combine for a very interesting experience.

Then I saw this.  At the base of the tower.  And I thought back to the 'falling objects' sign.  Now I invite you to look again at the dish in the picture above, or in the earlier one.  Do you see that triangular nick on the upper right corner? 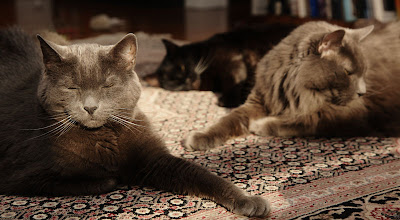 Twice now I've sat down to write a piece about Jones Beach,  first hesitating for the want of more pictures, then I was waylaid for the second time  when,  after returning from getting more pictures, I was confronted with the sight of all my children sprawled in the sunshine on the living room floor.  This is something I rarely see, all four of them at peace with one and other.  Well, at peace given some distance.
The triplets, seen here, were on the rug, the sun streaming through the double windows, the blinds half-raised and open.  Betsy (on the left) was half in shadow, and Molly, in the background, was just about blending into the distant shadows.  A very high contrast scene, there was no way I could capture this without some serious help from my Speedlite: 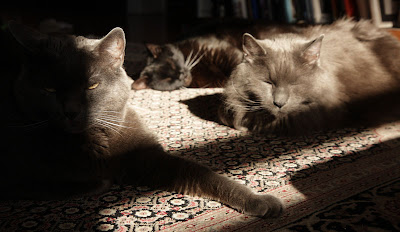 Above is the same scene shot with just the existing light, exposed for the highlights:  ISO 100, f11, 1/25 sec.
The challenge with a scene like this is not only to get all three cats in the picture with good expressions, preferably all looking towards the camera, but to light it so that everything can be seen without losing the sense of natural light.
I think the first picture has good light; you can tell sunlight from shadow and still see detail and contrast throughout the image.  Overall it's very warm; very often shooting gray cats with a flash results in a gun-metal colored result with Betsy, yet here she looks fine.
The difference between the two pictures?  Both were shot at f11, but the first one had a shutter speed of 1/200 sec, instead of 1/25, the better to handle the  +2 stop compensation of a direct flash. 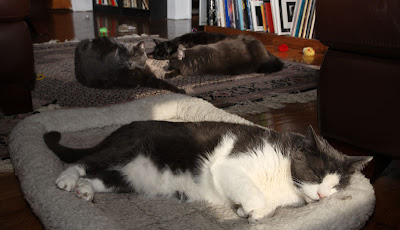 This is the best I could do to get all four of them together.  As it was, to get the first two pictures here I had to crouch down in Legs' bed with him, which he was quite tolerant of.
.
Visuals and Verbiage by Neil J Murphy deposited around 4:00 PM No comments: