Some of Janet and Gary's friends were having a picnic down at Amityville's beachfront last weekend. Though the skies were threatening, the rains never came (and wouldn't have mattered too much, anyway, since we were under a pavilion).
Live music was the order of the day; there were at least two adult bands, playing the usual classic rock, but the attraction for me was the appearance of my nephew, Devon, and his band, Vacancy. 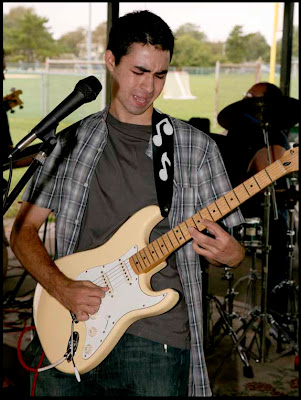 This is Robin Khatsernov, lead guitarist for Vacancy. In this shot he was warming up his fingers playing 'Whipping Post' with the big kids. This guy knows what he's doing (except, as I understand it, when to end a solo). No matter, he plays well and, as you can see, has the facial expressions down to a science. 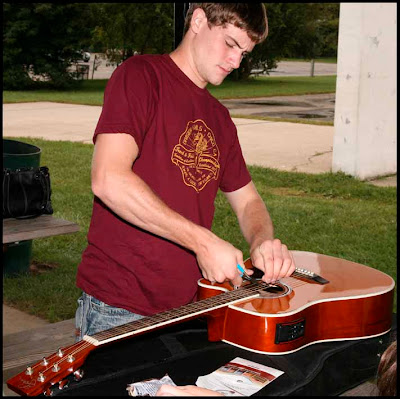 Devon needed to do a bit of surgery on his instrument before beginning. I'm happy to report the operation was a success, as we see here: 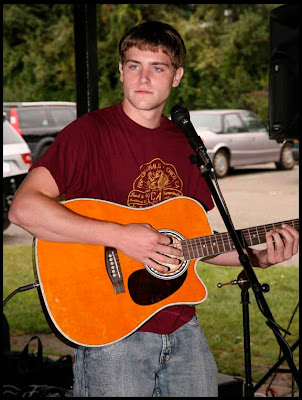 I was only there for the first set, which they played as a trio. This is Zach Hindin, keyboardist and Bob Weir fan. He's got a thing about the Islanders, too. 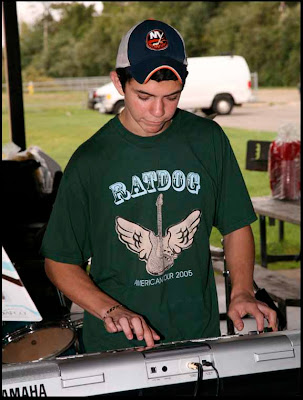 I didn't stay for their later set, and I understand I missed really experiencing the band as a four-piece group complete with drummer. 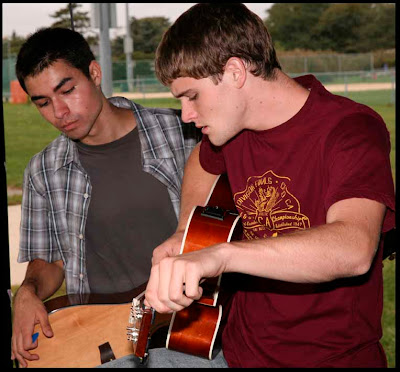 Here are a couple more from the same roll as the three below, just Clark solo this time. I printed these in several sizes in the darkroom at the time; I remember being very pleased with the exposures on this roll, and I really liked the shallow depth of field. These new scans don't do true justice to the detail and contrast of negatives, however the best of those prints from 1999 are too big (11 x 14) to fit on my flatbed scanner (8.5 x 13). But the detail of these scans are pretty good, for the web, at least, and the gray balance wasn't too far off, either, so with a little clean-up and color correction, here we go... 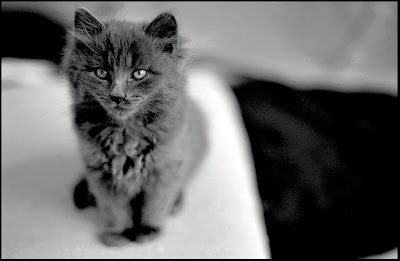 He was so cute! But at two months old, Clark had this intensely serious face that he could pull on and off at will, even though underlying all that fur was a permanent smirk. 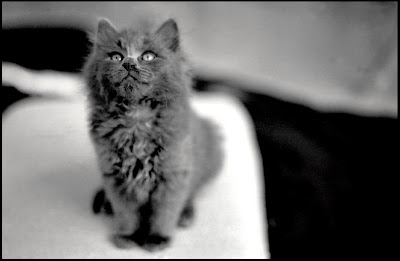 You see? All he has to do is lift his head and you'll see that he's laughing, as well as trying to read the paragraph above him.

When They Were Cute...

Every ten days is a lousy schedule for updating this blog, but the school year has dropped upon me hard and fast this fall; already I've done about nine senior groups (two forming '09) and at least a dozen undergrad groups. Three hundred or so informal portraits, a homecoming and numerous sports, all in the last two weeks.
I haven't had so much as a moment to do any shooting for myself, and I really should be cleaning the sensor of the 30D right now (it is filthy; I can't shoot over f11 without the sky looking mottled), but for some reason I starting thinking about these pictures the other day... 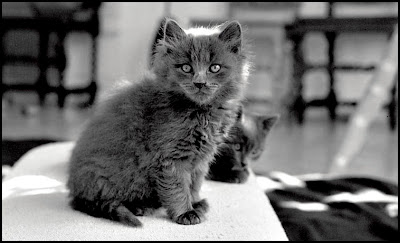 Clark and Betsy were about seven weeks old when these were taken in April of 1999. We had closed off the doorways in the dining room of the house in Long Beach with gates, and they had the run of the room. Without a table in it the only furniture were the antique chairs lining the walls, some blankets and a seat cushion. 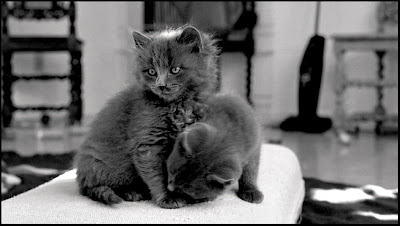 Molly was sleeping while these two were making a ruckus. It's funny how often one of them would be asleep while the others were playing. This was also the period when Betsy was more socially adjusted with the other two; as time went on she became more of a loner. It is rare that I see her sitting this close to Clark anymore. 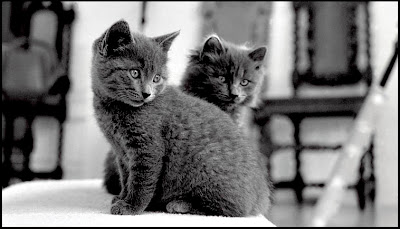 These were shot on Ilford XP2 film with a Pentax ZX-5. Probably used a 35-70 or a 28-105, I really don't remember what lenses I owned back then, I had a mix of manual and autofocus, since the ZX was my first AF camera. What I do remember is how nice the light was in that room in the late afternoon: The sun would bounce off the side of my house onto the house next-door, which would then reflect through a giant 6 x 6 foot window, completely filling the room with beautiful, soft light. 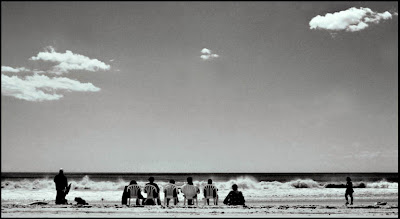 Ah, September. The end of summer, a time to sit on the beach and stare at the horizon, and wonder where the months all went. A time to think about the coming days of early darkness and autumn's chill. You could easily imagine that the figures in the picture above are doing just that, and perhaps even pondering their own mortality.

You'd be wrong, though, since this picture was made in the middle of the spring, in 1997. Of course, the figures could still have been thinking dark thoughts on that bright April afternoon, I don't know, but something compelled them to drag their resin lawn chairs out to the waters edge to watch the churning waters. My eye was drawn to the single line just about even with the horizon, and the head of the solitary standee poking above it. Shot on Ilford XP2, exposure unrecorded. 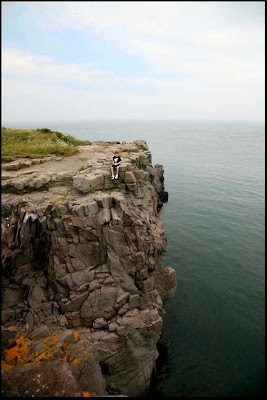 Here we have a picture to give any mother pause, if not outright heart failure. You wonder if the child's mother would ever trust his care to her brother again. But like me at his age (13), Brian has the nerve and agility of a mountain goat. Still, I'm glad he was sitting down for this picture. We were at Prim Point, overlooking the Bay of Fundy, outside Digby, Nova Scotia. This is the cliff in the background of the picture Sherry on the Rocks, in fact, Brian was originally in that photo, heading towards this spot, but it was somewhat distracting to the overall composition, and I deleted him. So to make it up to him, here's his very own picture and post on the Talking Pictures blog.
Visuals and Verbiage by Neil J Murphy deposited around 10:45 AM 1 comment:

Email ThisBlogThis!Share to TwitterShare to FacebookShare to Pinterest
Recurring Nightmares: canada, one of us 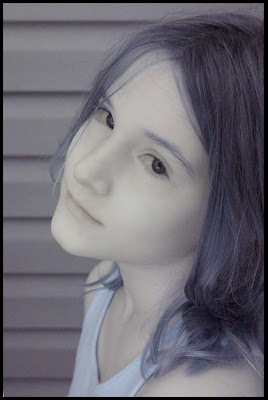 I haven't had a chance to use the InfraRebel for anything but landscapes since I got it, until yesterday, when we went to the Marks' for the Labor Day weekend. Ten-year-old Rebecca has always been one of my most agreeable subjects, although today she was a little concerned about my choice of locations for our informal portrait session.

I wanted to shoot her in open shade, which in her backyard required us to stand on the side of the garage. No problem with that, except that getting there meant we'd have to walk across the grass, which was something of a minefield thanks to the tireless work of Bosco, the family Lab.

But we were able to tiptoe our way through, and she struck a few poses for me. Notable about the infrared process is the way it smooths out the skin tones. Unfortunately in Rebecca's case, this means we don't get to see the cute smattering of freckles across her nose. It also does something a little weird to the eyes, dramatically darkening the blue of her irises, and slightly darkening the whites. 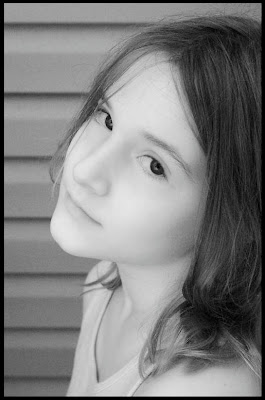 The first image was posted in a gallery on another website where a fellow photographer commented on the yellow skin tone and darkness of the eyes, saying it was a little too creepy for a portrait. After about two seconds of consideration, I agreed, but rather than try to color-correct it, I decided instead to reprocess the RAW file to a neutral monochrome. In Photoshop I used the magic wand to select the whites of the eyes (not an easy task given the graininess of the image) and lightened those areas.

Overall I think the black and white processing gives a better result when using the IR for portraiture.
Visuals and Verbiage by Neil J Murphy deposited around 9:28 AM 1 comment:

Email ThisBlogThis!Share to TwitterShare to FacebookShare to Pinterest
Recurring Nightmares: Infrared, one of us
Newer Posts Older Posts Home
Subscribe to: Posts (Atom)