Here's another example of Kodak's Recording Film, on a hot Wednesday afternoon in July.  For this one I was standing on the west side of Sixth Avenue at Bleecker Street, between Churchill Square (the Downing Street Playground) and Father Demo Square.  The pigeon was probably flying towards Carmine Street, a block to the north, and the Empire State building is, of course, about thirty-one blocks further north (and an avenue east) at 34th and Fifth.
This was shot with my first 35mm camera, a Pentax ME Super.  I think I had a 70-200mm zoom lens on the camera, and although I don't know for sure what the focal length was that I was using; I don't think it was racked out to the full 200mm, more likely it was at around 150mm, but after 25 years, my memory of these things is about as hazy as the sky was on this day.
The above image is also cropped from the full scene, and when I first printed this negative I made two versions: one was cropped as you see here, and the other horizontally, with none of the trees showing.  I liked the way that one looked, almost like a bas-relief of the pebbly building emerging from the grainy sky.  Below is the full image from the original negative. 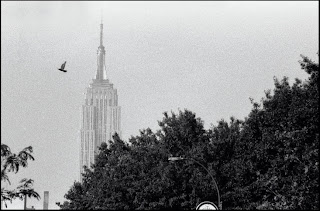 Looking at the contact sheet, this was the first of only three frames that I shot of this scene.  The other two were verticals, the second at about the same focal length as this one, and the last a longer shot (i.e., a shorter focal length, probably at 70mm) to show more of the street.  I can't remember if I even saw the bird in the viewfinder when I took the picture; I may have, and then made the second to insure that I'd have what I was initially after, since I had no idea it would be positioned so perfectly, and I certainly wasn't trying to compose anything like what I wound up with.
But serendipity has been a wonderful collaborator.
.
Visuals and Verbiage by Neil J Murphy deposited around 10:38 AM

Email ThisBlogThis!Share to TwitterShare to FacebookShare to Pinterest
Recurring Nightmares: The Black-and-White Years

My name is Donald Boykins, I'm here to appreciate Dr Akhigbe for using his herbal medicine to cure my herpes virus. Is about 3 years and 6 months now I have been living with this virus and it have really really be a serious problem to me, I was so confused cause I have been taking several drugs to be cure but all of my effort was in vain, one morning was browsing through the internet then I saw several testimonies about Dr Akhigbe curing people from herpes virus and Immediately I contacted Dr Akhigbe on his email:  drrealakhigbe@gmail.com. I told him about my troubles and he told me that I must be cured. He gave me instructions and which I rightly followed, so he prepared a herbal medicine and sent it to me which I used for three weeks and I was cured totally everything was like a dream to me and my herpes was permanently gone. Dr Akhigbe God bless you and give you the power and wisdom for more cure, I don't know if there is any one out there suffering for herpes virus or any other of there diseases. DIABETES, CANCER, HIV/AIDS, HERPES, HEPATITIS A&B, HEART DISEASES, CHRONIC DISEASES,  YELLO FEVER, EPILEPSY, LUPUS, STRIKE, SPINAL CORD, ECZEMA, KIDNEY DISEASES, ACME, BACK PAIN,   DENGUE SCHIZOPHRENIA, POLIO,MULTIPLES SCLEROSIS, HIGH BLOOD PRESSURE, VAGINAL  DISCHARGETHYROID, ARTHRITIS, MENINGITIS.etcWhy don't you contact Doctor Akhigbe and be free from your diseases because he is very good and honest herbalist doctor, he is also know as the godfather of herbal root. Contact him now via his email:   drrealakhigbe@gmail.com         or whatsapp   him on     +2349010754824.         website https:drrealakhigbe.weebly.com.

I'm 57 years old and female. I was diagnosed a couple of years ago with COPD and I was beyond scared! My lung function test indicated 49% capacity. After having had flu a year ago, the shortness of breath, coughing and chest pains continued even after being treated with antibiotics. I've been smoking two packs a day for 36 years. Being born without a sternum caused my ribs to be curled in just one inch away from my spine, resulting to underdeveloped lungs. At age 34 I had surgery and it was fixed. Unfortunately my smoking just caused more damage to my already under developed lungs. The problem was having is that I enjoy smoking and don't want to give up! Have tried twice before and nearly went crazy and don't want to go through that again. I saw the fear in my husband and children's eyes when I told them about my condition then they start to find solution on their own to help my condition.I am an 57 now who was diagnose COPD emphysema which I know was from my years of smoking. I started smoking in school when smoking was socially acceptable. I remember when smoking was permitted in hospitals. It was not known then how dangerous cigarettes were for us, and it seemed everybody smoked but i was able to get rid of my COPD lung condition through the help of  Dr Akhigbe   total cure herbal medicine. my husband saw his testimony on the internet he used his powerful medicine to cured different diseases. we contacted his email   [drrealakhigbe@gmail.com}   He has the right herbal formula to help you get rid and repair any lung conditions and others diseases, will cure you totally and permanently with his natural organic herbs,We received the medicine through courier delivery service. I wish anybody who starts smoking at a young age would realize what will eventually happen to their bodies if they continue that vile habit throughout their life.
Dr Akhighe also cured diseases like, HERPES, DIABETES, HIV/AIDS, COPD, CANCER,ASTHMA,STROKE,LUPUS,JOINT PAIN,CHRONIC DISEASES,PARKINSON DISEASES,TUBERCULOSIS,HIGH BLOOD PRESSURE,BREAST INFECTION,WOMEN SEXUAL PROBLEM, GINGIVITIS, ERYSIPELAS,STAPHYLOCOCCUS,HEPATITIS A/B, QUICK EJACULATION, IMMUNOTHERAPY, GONORRHEA,SYPHILIS,WAST/BACK PAIN,PELVIC INFLAMMATORY, DICK ENLARGEMENT,HEART DISEASES,TERMINAL ILLNESS,SHIFT IN FOCUS,ATAXIA,COMMON COLD,CROHN'S DISEASES,ALCOHOL SPECTRUM DISORDER,GRAVES DISEASE,HEARING LOSS, INTERSTITIA CYSTITIS,LEUKEMIA,MULTIPLE SCLEROSIS,OBESITY,RABIES,SCOLIOSIS,INFLUENZA, POLIO,JACOB,ETC. If you are out there looking for your cure please  contact  dr Akhigbe  by his email    drrealakhigbe@gmail.com     or contact his whatsapp number   +2349010754824
God bless you Dr Akhigbe for your good hand work on my life.