Pearl Harbor has been an American Naval Base since the 1890's, and was the site of the infamous Japanese surprise attack on the morning of December 7, 1941.  As well as forcing the United States into World War II, this battle also resulted in the greatest loss of life on a single ship in American Naval history.

BB-39, the USS Arizona, had its keel laid in March of 1914 at the Brooklyn Navy Yard, and was launched from there on June 19, 1915.  She was commissioned on October 16, 1916.  After a month-long shakedown cruise for some final work, the battleship was assigned to its homeport of Norfolk, Virginia.  Though built in time for WWI, due to the shortage of coal in Great Britain, her patrols were confined to the east coast of the US.
After the war, Arizona conducted fleet maneuvers in the Caribbean until her transfer to the Pacific in September, 1921.  Based just south of Los Angeles in San Pedro, California, she operated there for eight years, performing maneuvers and Marine training exercises, then returned to Norfolk for a complete modernization, an overhaul which was finished in 1931.  After taking President Hoover on an inspection tour of Puerto Rico and the Virgin Islands, she returned to San Pedro.

In 1940, just before she was transferred to the Hawaiian command, the battleship was overhauled once more, this time at the Puget Sound Navy Yard.  Arizona finally arrived at Pearl Harbor in February, 1941.
Though the ships logs were lost, it is known that she entered Pearl Harbor and moored at her quay for the last time on Saturday, December 6, 1941.
* * *
It's a quiet ride on the launch from the visitor center to the memorial.  You hear the motor, and the water rushing past, but human voices become muted as the boat nears the brilliant white sloping structure.  Disembarking at the dock the only sounds are from the park rangers directing the crowd; inside almost everyone speaks in a whisper.  Even the children are silent.

Opened in 1962, the concrete memorial seems to float astride the sunken battleship. It actually stands on piers, and no part of the building touches the ship. It's an open-air structure, with seven large openings on either wall, and another seven in the ceiling above.  Seven openings to signify the seventh of December.  There is a large opening in the floor near the far end, you can lean on the railing and look down at the wreck.
Dominating the far end of the memorial is the marble wall with an alphabetical list of the 1,177 sailors and marines who died aboard the ship that December morning, most of whom remain entombed in the waters below your feet. 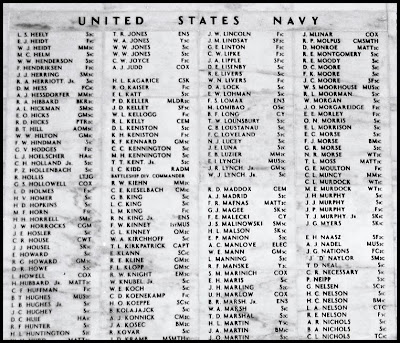 The marble and engraving are the same as you'll find in any United States National Cemetery, which lends an air of solemn familiarity to the place.  But although this is not a national cemetery, it is a war grave, and is administered as such by the United States Navy as an active site.
An active war grave, you may be thinking, more than seventy years after the battle? Well, yes, as the few survivors of the attack have been allowed to have their ashes interred on the ship in a niche within the Number Four turret, which is located below the waterline, and behind the Number Three turret, pictured above.  To date, a little over two dozen urns have been placed.  Men who served on the ship before the attack, but not assigned to it at the time, may have their ashes scattered in the waters over it.
A full list of the current interments and scatterings, as well as more information about the ship and memorial, can be found here.
.
Visuals and Verbiage by Neil J Murphy deposited around 12:53 PM

My daughter and her husband visited the Arizona Memorial in December 2009. They were very moved by what they experienced.

I have friends who swear that no nation on earth does 'memorials' as well as the Americans. Your post today confirms that in my mind.

It is mind-blowing to me, the sense of connection required for previous ship's-crew to wish to be interred at the sunken ship. And for their wish to be granted ... 'active' indeed.

Thank you for this contribution, Neil. Each week I enjoy your writing and your research.

What a great post! I knew of this memorial but unfortunately have not had occasion to visit it. It must be a very moving experience as all such memorials are, where one knows that so many young people died while serving their country.

Intersting about the current interments.

PS I love your header. Who is s/he?

Ann, the current header is my thirteen-year-old gray shorthair, Betsy. (She usually has a sweeter expression, but the sunlight was fairly harsh.

Wow! What a interesting post. Thank you so much for sharing.

Very interesting post! I visited the Arizona Memorial 35 years ago, but I didn'tknow about the 'active' part and that survivors could have their ashes interred.